What was old was new again as the most recent Canadian Hot Air Balloon Championship (HAB) was held in Saint-Jean-sur-Richelieu, Quebec for the first time in 20 years. It was part of a revival of the rich history of competition balls in the city which has long hosted the HAB national and international championships. The city was the site of the 1988 North American FAI HAB Championship as well as the country’s only HAB World Championship in 1991.

“We are recognized as the national capital of hot air ballooning, so it is only natural that Saint-Jean-sur-Richelieu host the championship,” said Éric Boivin, President and CEO of the International de montgolfières de Saint-Jean-sur. – Richelieu. “We put the international organizational capacity at the service of the great Canadian balloonists to recognize their skills. Our goal was really to showcase flight expertise and give more visibility to pilots through innovative tools.

For event director Garry Lockyer, it was a bit of a homecoming, 30 years after leading the 1991 Worlds. His favorite chip stand is gone and accommodations have improved. But otherwise, little has changed in the balloon capital of the country, home to nearly a third of all balloon pilots in Canada. It was great to bring the championship back as it hosted the largest number of competitors in decades at nineteen – eighteen of whom were rookies.

“I was terrified – me and 18 rookies,” said the competition’s only veteran and defending Canadian champion, Jason Adams. “Knowing that I was in the hometown of half of the competitors, several whom I had faced the previous year at the 2020 Amicale* and one whose father was a three-time Canadian champion (Martin Unsworth and his father Dennis), I knew it would be no cake walk; it would be anyone’s game.

To compete, Adams had to return from his career as a professional pilot in Africa, fight complex travel restrictions, quarantine for two weeks and gather his team from across Canada. He already had his place for the HAB 2022 World Championship in Slovenia but did not want to give up the Trumpeter Swan trophy awarded to the Canadian champion!

Over four sweltering days, competitors logged four flights and a total of nine tasks to show off their ability to plan and execute the flights. For many, it was a family affair. Not only was ED Garry proud to see his son Shane make his successful competitive debut, many other family member couples did the same. Importantly, the event also saw more junior and female competitors who are now eligible to represent Canada at upcoming events around the world. 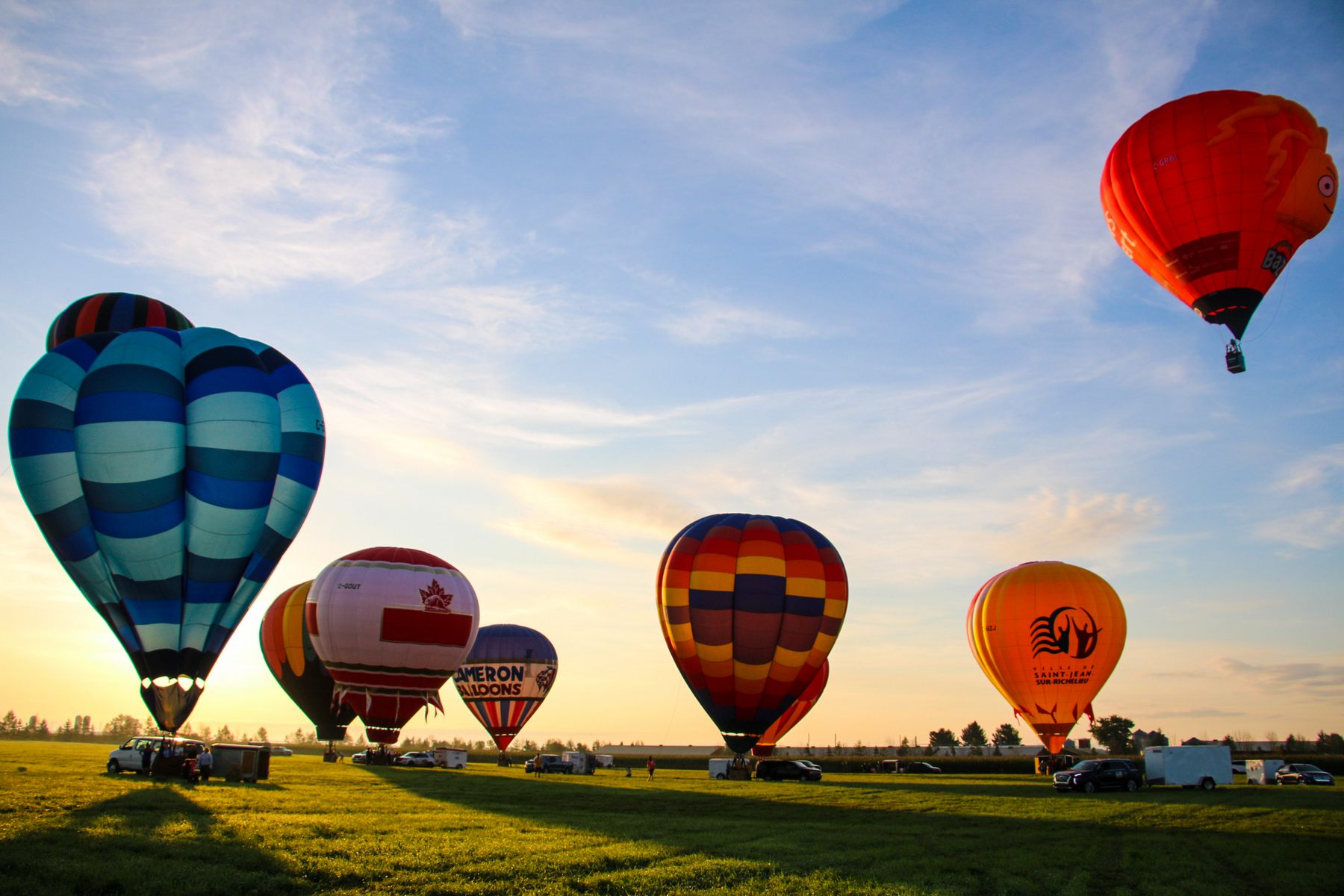 The airport is a familiar sight and site for visiting balloonists. The area is mostly flat and is about halfway between Montreal and the US border about 35 minutes each way. Staying clear of the busy airspace to the northwest, pilots generally fly through westerly winds across the Richelieu River to farmland across the way. A remnant of the French colonial era, the fields are organized in the seigneury style where everyone had access to water and therefore the fields are long and skinny. While most are planted with corn and other crops in August, the sheer number of fields means you’ll come across an empty one quite often. There are also the very strange Monteregian hills that stand out against the otherwise flat area (nearby, Mont-Saint-Grégoire is 824 feet high). Great efforts in landowner relations by local pilots usually means cheerful landowners who are very familiar with receiving balloons.

As they met during registration, the pilots were offered training on the FAI recorder. Although it was about to disappear as a competitor’s data capture method, it was still new to all but one competitor. Despite the steep learning curve – pilots sometimes need to key in target coordinates and toss virtual markers in flight – everyone was eager to learn despite feeling overwhelmed.

The first flight was canceled due to weather conditions. But it all came crashing down the next morning when the task sheet called for a Hesitation Waltz (HWZ) and a Pilot Stated Goal (CEO). Departing from the airport, the pilots had to fly to one of two targets and throw a marker at the one they were closest to. Most pilots had good results, choosing the southwestern target. Pilot JP Lemaire of Nova Scotia posted the best score at 1.54m with his 11-year-old son throwing the marker in what will likely go down as the best father-son weekend ever the temperature. The second task proved to be more difficult as many mistyped the chosen coordinates into the FAI recorder. 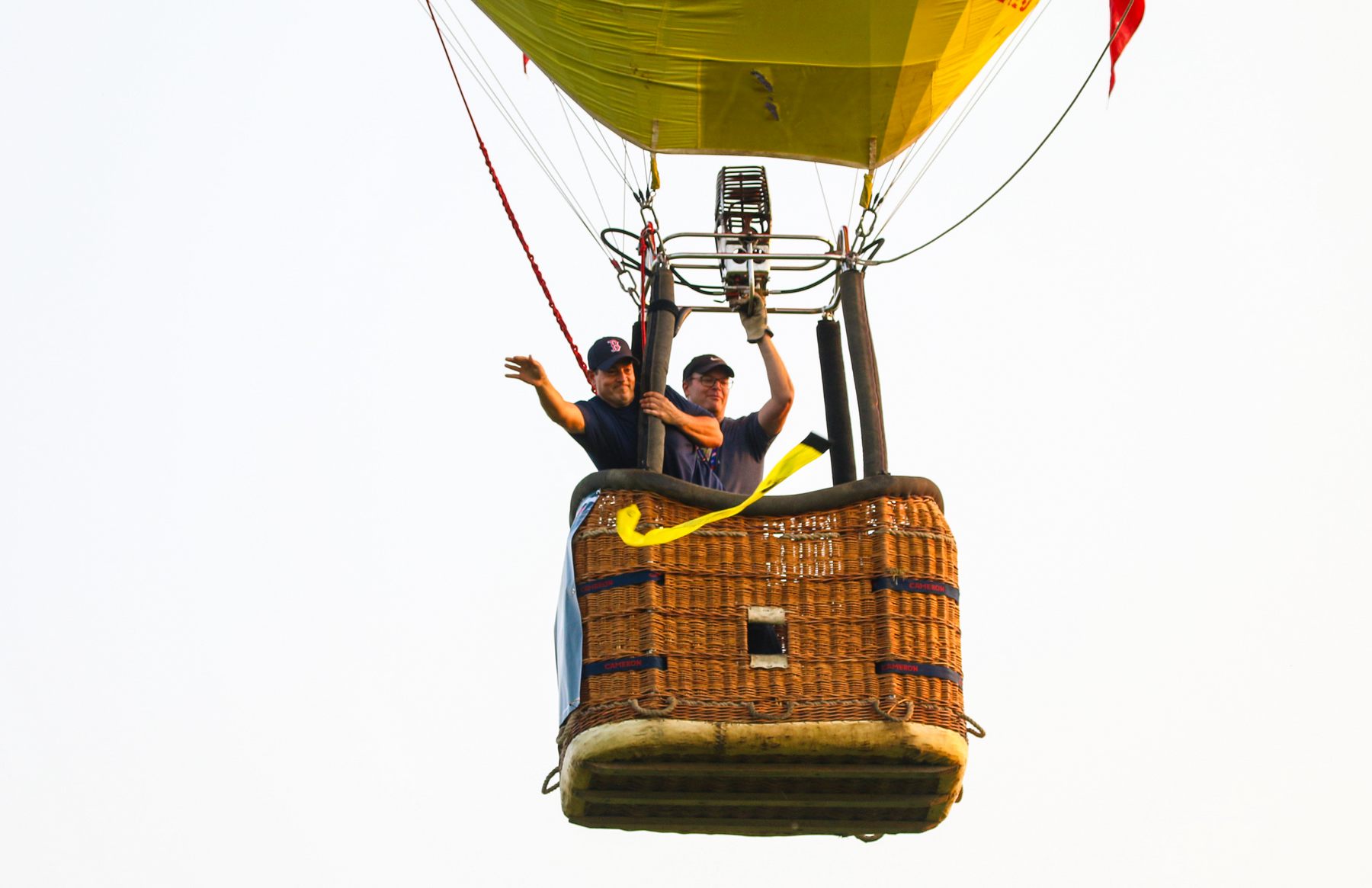 Rookie Éric Fortin’s teammate throws the marker towards the target. For a rookie, there’s nothing better than throwing a marker at the target you’ve worked so hard to find. Credit: Maryse Phaneuf/International Hot Air Balloon

The flight provided an excellent opportunity to test a new locally developed technology that enabled competitor tracking by online viewers. Each pilot wore a radio-linked tracker which is no different from the Windsond technology now widely used in hot air balloon competitions. At the time of the briefing, the Facebook page would go live. While this year there was no sound, viewers could follow what was happening before watching the launch, then alternate between video and tracking the pilots on the map. The proof of concept was very successful and an extended version is planned for next year. Starting at around 3:30 p.m. in the video, you can see the markers inflating, launching and then launching (there is no audio).

While awaiting a weather decision for the next flight, attention turned to learning from an abandoned task sheet. Garry explained which buttons to press, when and why. Experienced logger user Jason Adams told others to avoid small mistakes because these can cost you valuable ground.

The skies were stable despite the intense heat and the pilots flew a Hare and Hounds (HNH) which took the competitors through the city. For HNH, pilots chase a flying ball with the target on board. Once the hare has landed and set its target, the pilots launch their markers, the closer the better. Johann-Francois Frève and Jason Adams tied at 1,000 points in task three as they scored impressively with 0.20 and 0.22m respectively. The video looked like this (starting at 29:00). 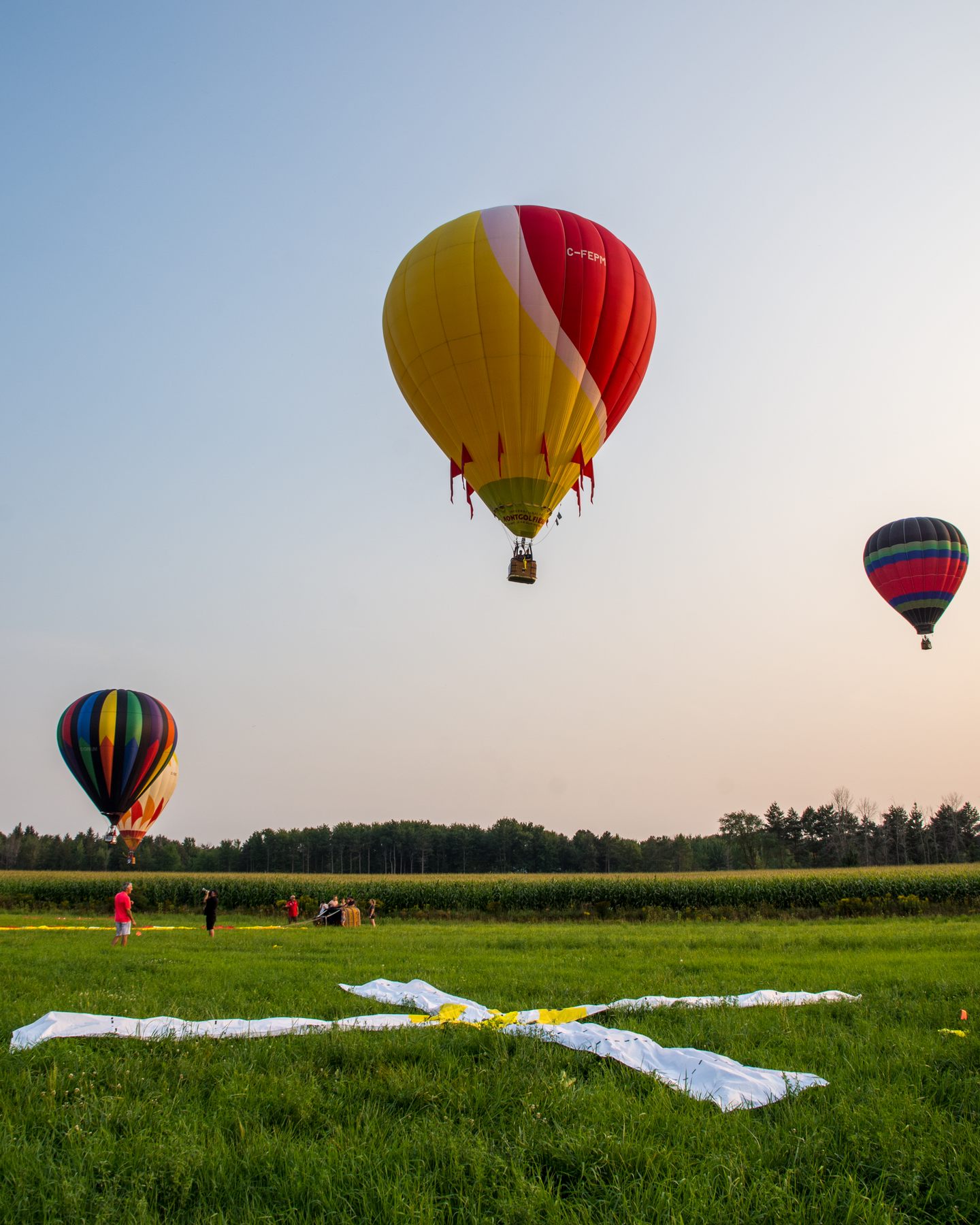 A balloon in the colors of the International flies over the target drawn by the hare. Credit: Bertrand Tougas/International Hot Air Balloon

The next morning a triple was called to test the pilots again. Two PDGs and an Elbow (ELB) gave the pilots another chance to show off their skills with the recorder and the results were much better than the previous time with pilots managing to understand the recorder inputs. Jacob Vaillancourt won task four with 28 yards and Jason Adams had 20 yards on the fifth. The youngest competitor on the field, Philippe Watters, registered an angle of 142.85 degrees in his race ball, specially designed to rise and fall quickly, useful for finding the right winds in competition. To capture footage, watch this from 59:00. 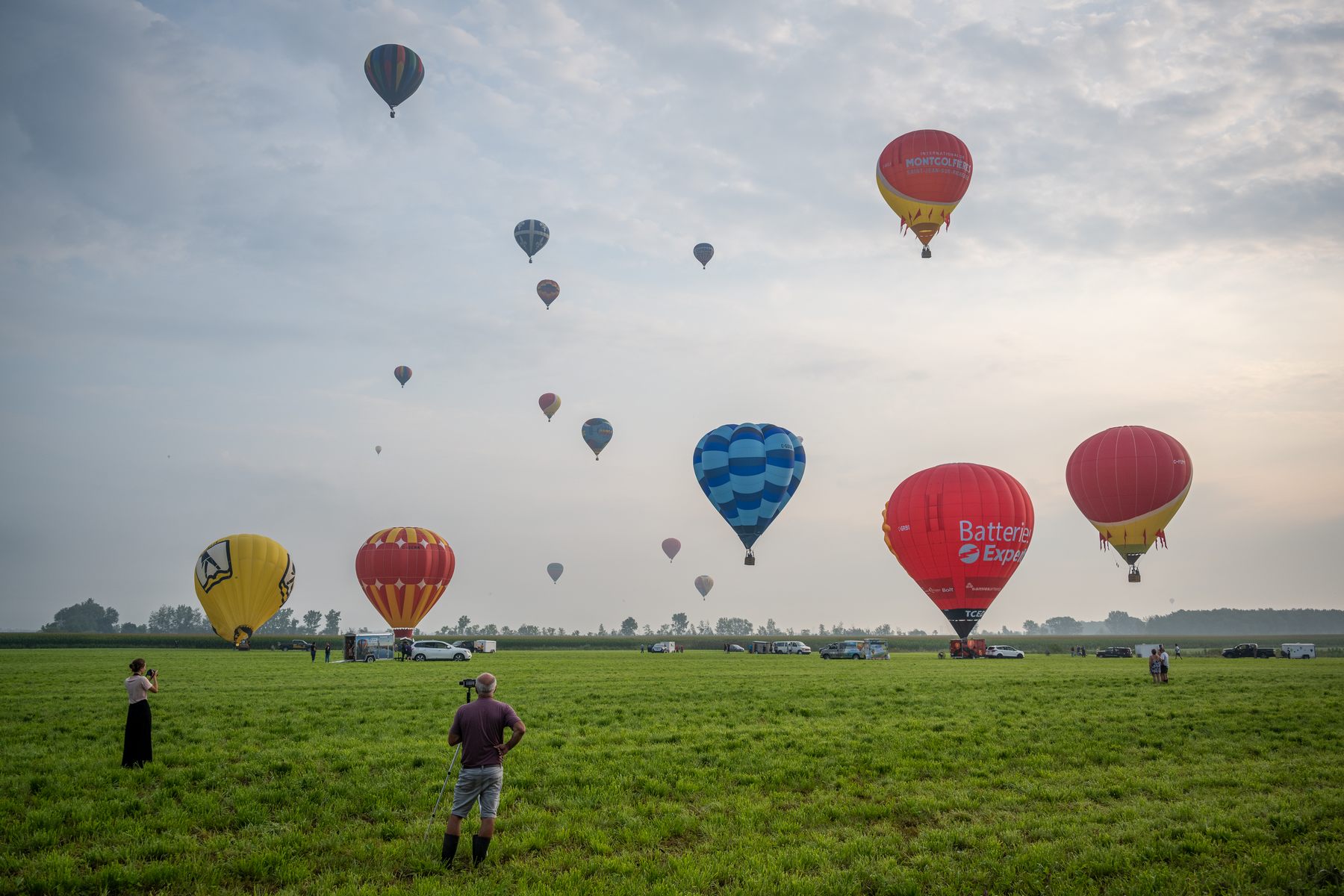 A foggy morning awaited the pilots who had three tasks to solve. They did very well with close scores on all three virtual tasks. Credit: Jacinthe Trudeau/International Hot Air Balloon

With three steals in the books and two stealing opportunities remaining, there wasn’t much separating most of the top contenders. Veteran and defending champion Jason Adams was in the lead – many expected that before the event – ​​but others were following close behind. Too close for his taste. When a thunderstorm didn’t dissipate on Saturday evening, it meant there was only a flying window and good weather left in the forecast.

During the final briefing, the pilots read their task sheet to find three pieces of information. It was not a crowning glory, but a full competition flight to determine who would be the Canadian Champion. While flying to a common launch site, they should establish a CEO before flying to an intersection for a JDG, then to another location of their choice for another JDG. This meant three tasks requiring recorder inputs. Had the pilots learned from a few previous flights? It remained to be seen as they took off on a perfect summer morning. The last flight included live imagery of the target sites beginning at 1:11:00 a.m. 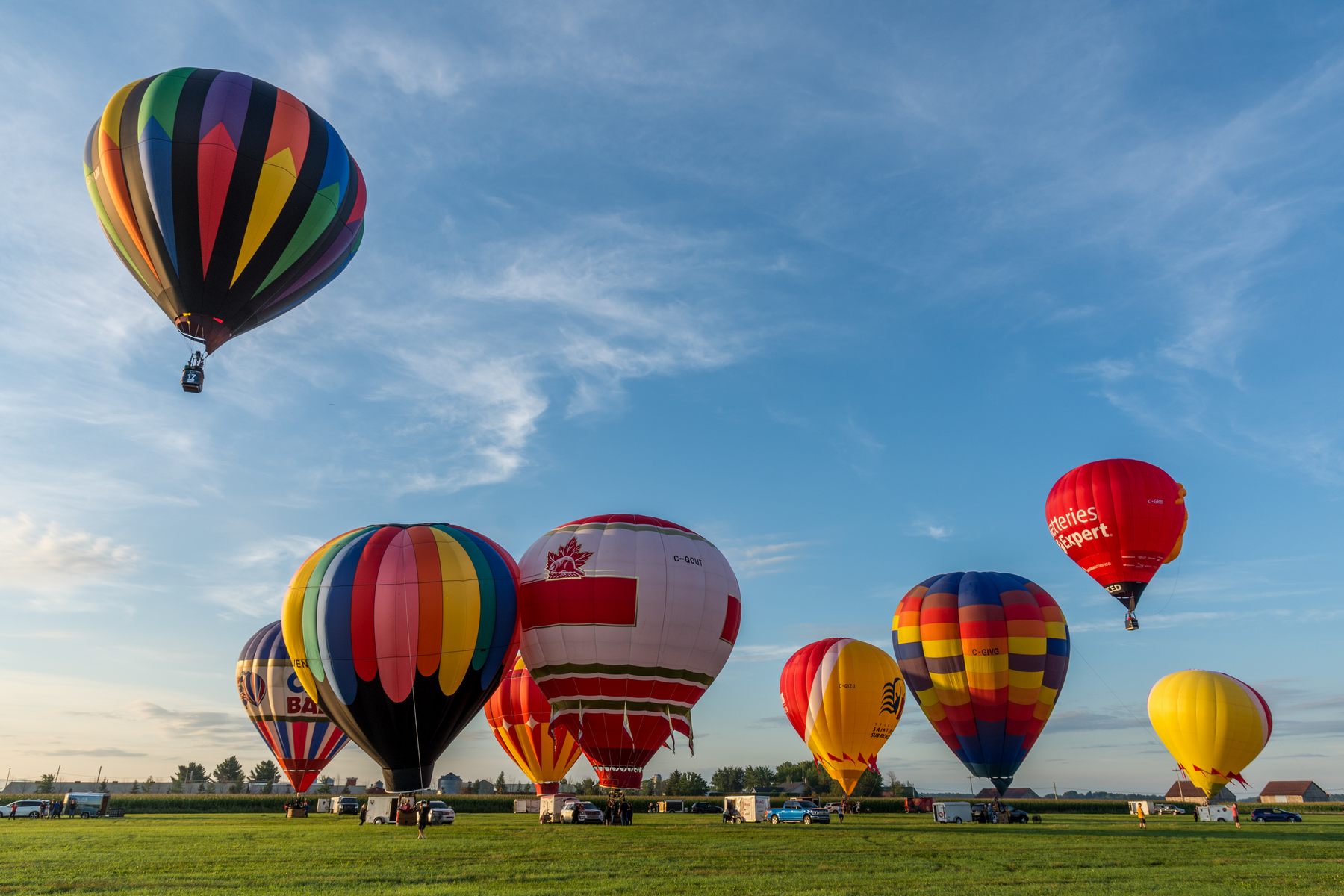 Pilots race to launch into spectacular skies on the final flight of the 2021 Canadian Championship. Credit: Bertrand Tougas/International de montgolfières

When the results were published, Jason Adams had indeed defended his title. “The last flight, I had my game in mind, that’s for sure! Several competitors were hot on my heels and had jumped along the learning curve. I knew the team and I had to be at our best. He managed to avoid the competition and win another crown. “My team and I were absolutely thrilled to win. Thank you so much to my dream team and everyone who helped organize the competition, including Garry and the Saint-Jean team. It was truly a dream come true!

Indeed, for the organizers including me, it was wonderful to see what had been a longtime dream come to fruition. Canada now has qualified competitors for the upcoming Women’s and Junior Championships. A majority of competitors intend to return to Saint-Jean in 2022 along with others who jealously missed the desire to pre-register. The plan to host the Canadiens for three consecutive years has come to fruition and there could be more up our sleeves as well. Stay tuned! 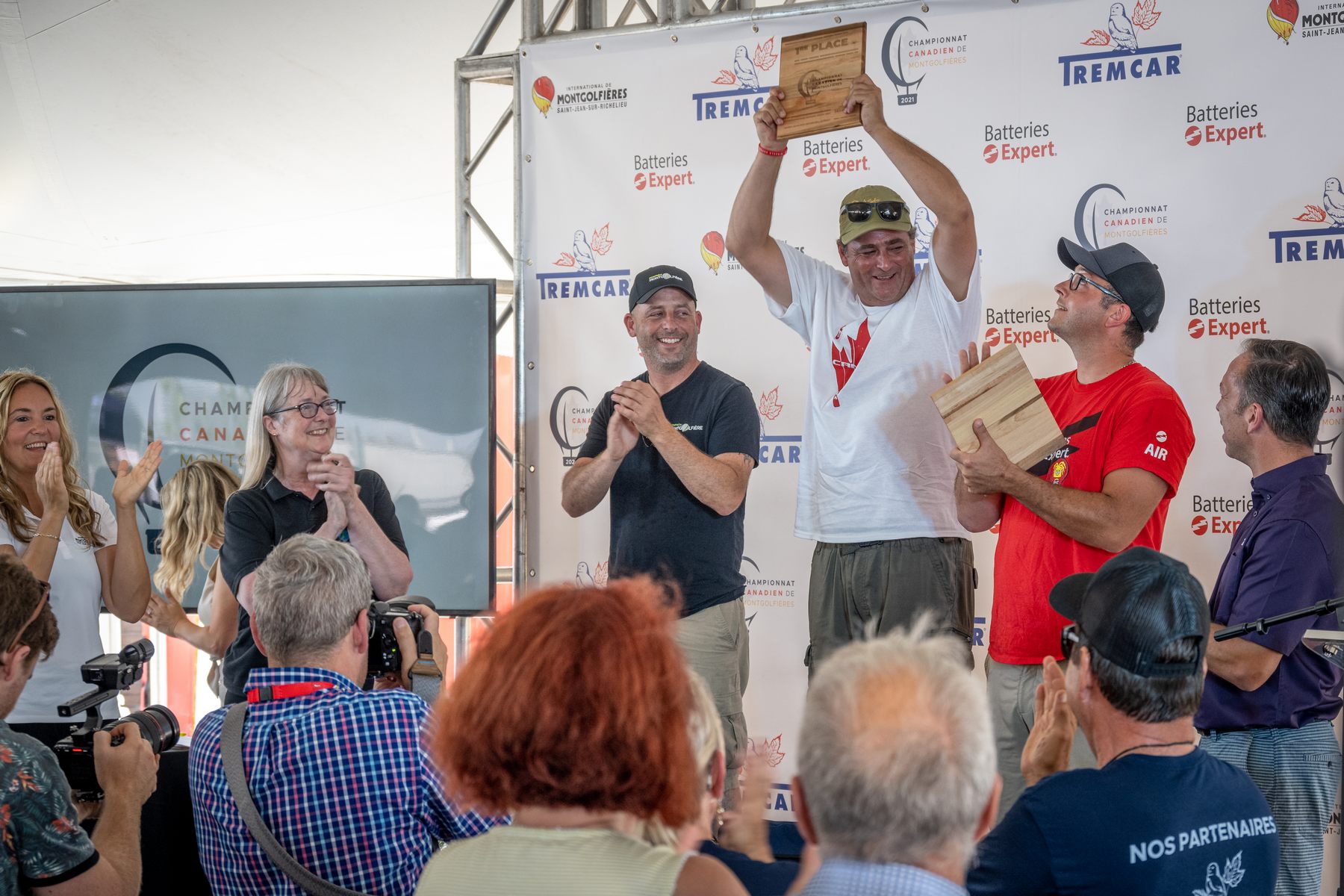 Cover photo: Pilot Jacob Vaillancourt flies his Baz balloon towards the target during the first round of the 2021 Canadian Hot Air Balloon Championships followed closely by a number of competitors. Credit: Maryse Phaneuf/International Hot Air Balloon